Russian cosmonaut and former commander of the International Space Station (ISS) Pavel Vinogradov told Sputnik on Saturday that the new air leak on the ISS Zvezda module did not pose any serious danger.

On Friday, experts from the Moscow Region-based Mission Control Center asked the ISS crew to help locate the air leak in the Russian module Zvezda, as the station’s gas reserves to compensate for the loss of air were running out, according to cosmonauts’ communication with the Earth broadcast by NASA.

“There are no problems on board, regular work continues,” Vinogradov said.

The cosmonaut noted that the ISS crew had been working on the leak’s elimination for the past year and a half, adding that everything was so far “great.”

In October, a crack, which caused an air leak, was discovered and temporarily fixed in the intermediate chamber of the Zvezda module. At the same time, the executive director for manned programs of Roskosmos, Sergei Krikalev, has said that the air leak on the ISS might not be where the crack had been found. 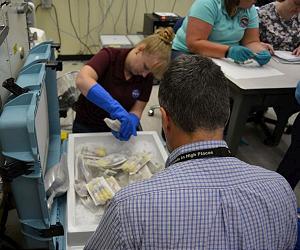 
NASA has awarded a contract to the University of Alabama at Birmingham to provide a suite of freezers to maintain a controlled temperature environment for science samples aboard the International Space Station, as well as to and from low-Earth orbit.

Continue Reading
You may also like...
Related Topics:cosmonaut, ISS, Russian

‘Guardians’ of the galaxy: Space Force personnel get a name
Ancient Earth had a thick, toxic atmosphere like Venus